Starry's left knee was swollen after the intense gyming & cheer training for the past one week. Hence, I decided to bring Starry to see the Fajar Sensei after our hair cut @ West Coast Plaza. Finally had our hair trimmed. Starry looking shuai shuai now. =)

The Fajar Sensei was popular among the cheerleaders as his treatment was effective for most cheerleading related injuries and the most important thing was that he gave special rate for cheerleaders. 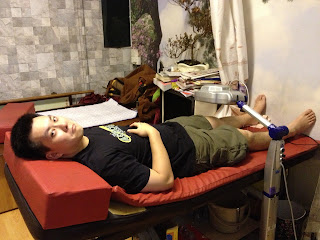 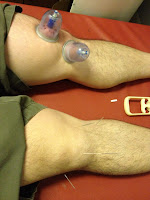 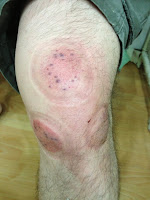 For treatment, there were a total of 4 needles on Starry's right knee and 3 little containers were placed on his left knee to removed the blood clot. A lot of blood were being drained out from his left knee. It was quite scary though. Luckily Starry never see the blood that was drained out from his left knee, if not he would surely faint. =P Haha... Starry felt much better after the treatment. His knee was not as tight. Beside the treatment, Starry also bought a supplement from the sensei to strengthen the cartilage that hold the knee together. Wish Starry a speedy recovery! =)